I Think This is Called Momentum

I have a rather large list of opened ended UFO's at the moment. Imagine me wincing right now! It's definitely more than is normally allowed to happen around here, even with the typical do-what-feels-good-in-the-quilting-room attitude that generally reigns supreme here at Quilty Folk.

As usual though, my brain keeps coming up with ever more interesting ideas to try. Yep, there are unquestionably gonna be new and improved quilts in my future! In this vein, I decided to dedicate myself to at least one more 'finish' here in the short term. Once a project is dumped onto the completed quilt top list, then the burgeoning sense of overwhelm seems to drastically reduce. People ask how I can have so many open ended projects going on, but the wholly, 100% finished quilt tops just don't have the same effect. All the major decision making struggle and angst is done and over with at that point! Right now, at least part of the problem with the too-long UFO list is this: I have a couple quilt tops that unexpectedly jumped OUT of the drawers and demanded more work done on them. So not playing fair!

In the spirit of crossing things off the list, the 9-patch seemed like an easy target. Like I've stated before, it was started in November of last year and then essentially forgotten about. In my memory, it was started in a rare moment of basically looking around the quilt room and wanting/needing to start something new. Now, sometimes {rarely} I'll go totally off the rails and just dive into something super spur of the moment and not very well thought out. Most times though when this particular feeling overtakes me, I look to the stacks of marinating fabric sitting around the quilt room.
This is where I've spent countless hours pondering all kinds of fabulous to-me options. This is dream time. These fabrics have been pulled out numerous times in a period of months and years. Stacked and restacked. Fabrics and colors tossed or perhaps newly introduced? Ideas, patterns and design concepts distilled into an important nugget or two. What story does this specific blend of fabric want to tell?


Like so many other projects started around here, Moody 9-patch ended up being an interpretation of an antique quilt. That probably sounds relatively simple. It can be, but this time it most certainly wasn't. I have played with this pile of fabric many, many times in the past couple years and just couldn't wrap my mind around which fabric should go where. I considered several different other design ideas too. No dice. No matter what direction my musings may have taken me on any particular day {and you can bet a few were vastly different than this oh-so-simple setting}, I would always come back this basic 9-patch with large sashing units. Apparently, that part HAD to be!


Most probably, it was the floral fabric holding me back. Though I love and adore them, {why else would I buy them?}, florals often times throw my brain into a tizzy of doubt and confusion. And I positively dread cutting into them. How do you successfully cut up and incorporate a strong floral into a quilt design without it completely overpowering everything? Or cutting it into without ruining the floral gorgeousness. Is it even going to look good cut into little squares etc.? And then, what if the floral turns out to be a huge mistake {the quilt wants a geometric print instead?}. You won't KNOW until the quilt top is near completion. What a disaster that would turn out to be! Ah, well. Eventually it's time to do something even if it turns out to be wrong. Gotta love those days of longing to start something new. They oftentimes turn out to be wonderful permission to plunge right into the thoughtfully, oh-so-carefully charted path of 'unknowns'!
Does this moody looking quilt top make you smile too? I'm sure you were wondering why I didn't just toss the floral fabric and do something easier. Well....., would I be sitting here smiling if it was just any old boring fabric used instead of that fantabulous print? Part of the thrill is meeting and conquering the challenge, whatever it may be. When intuition and instinct is telling us something needs to be done a certain, specific way, then it's our job to go the extra mile to make sure that it happens. We're not going to be happy with the end result if we know within ourselves that we've cut corners on what could have been.

When cutting the floral strips, there ended up being a couple strips where the floral design aligned along the edge instead of being centered. Not having enough fabric to properly fussy cut, I determined to use these specific units along the outside edges of the quilt. Problem solved!
Overall, it was a great play with color, really stretching me. The floral fabric is actually a very deep, brownish purple fabric at base, but I didn't want a purple quilt, which is what I figured I'd get if I went too 'matchy-matchy'. Luckily I had enough yardage with four or five different fabrics to create the blue 'background' effect, something I hoped would accentuate the floral and kind of show it off. They tied in well with the blue flowers in the floral without being an exact color match. I like that. Too much perfection bores me to tears!
One blue fabric was almost too dull to use, but I basically just held my nose and started cutting. Even after I dug through the stash totes, it was so much better than anything else, I felt like there was no other choice. It's amazing and wonderful how forgiving color/tones can be when you go 'scrappy'!
In the case of the cornerstone squares, I deliberately used the lighter, but obviously more drab looking purples. Wowsers have these fabrics been difficult to find a good home for through the years! Those areas needed to be an obvious contrast without competing in any way with the floral, but still tie back in and transition well with the dark brown. The more 'brownish' of those drab purples tended to go to the outside edges of the quilt so as to not deliberately bring down the sparkle in the quilt.
The horizontal sashing was actually harder to decide on because I absolutely didn't have what seemed like a best option. Not that I knew for sure what that might be! And so I dithered and dithered until finally going with that very dark brown fabric. It's almost purple, it's so deeply brown. Truly, I thought that particular area of the sashing needed to be a medium tone but Meh! What do I know? lol  Make the call and just move on is generally how I roll these days. Seriously, what would be the point of trying to use up these languishing stash prints and then run to the quilt store for a flawless fabric match in yet another area of the quilt? I'm not saying I'll never, ever do that, but I'm generally gonna try everything else possible first!


Another project that I'm trying to work on a little every day or so is these tulips blocks. Which didn't start with these applique blocks, but rather the abandoned bits from another tulip quilt! Of course. Are you surprised? So many of my projects start with little seeds from another quilt and then spill into each other willy nilly until I end up with a series of ideas!


So... the little hourglass units were the actual 'start' of the previous tulip quilt, an AHIQ prompt and now this one too. Somehow I had cut them out the wrong size and rather than fixing them or starting new, I promptly ditched the idea altogether and went in a totally different direction. Which was fine except for the fact of  all these little hourglass units wasting away!


Uh huh. Can't have that. And why not have another tulip quilt? It's been very, very tedious sewing up all these hourglass units and I can only handle so much before moving on to another project. Finally I'm at the point where all 196 units are sewn together, points trimmed off and ready to go. Honestly, I've worked on them off and on for weeks!


Just need these tulip blocks finished up and it'll be on to the sewing up rows phase. At first, I wasn't at all sure about the leaves. My parents are both gardeners, as are a couple siblings and even my daughter. Tulip quilts have these wide, flowy leaves that never ever show up in quilts for some reason. For this particular quilt I wanted to at least make a nod to the reality of nature! Four blocks in made me frown, then six blocks in I was cocking my head over to the side saying 'maybe' and now at nine blocks on the wall, I'm finally sold on the idea.*whew!  Okay. This will do. Onward ho! And I'm also settling in to the idea of having the hourglass units join together with the brown square in the middle. Things are progressing. What more can we ask for? 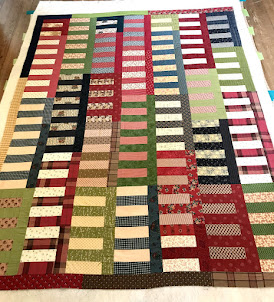