This Quilt Top is Done and I'm Calling it 'Glory Be'!

This was a great quilt project to work on the past week or two. The colors are perfect, the applique fairly simple, and this time around, I didn't even worry too much about getting the placement just right. A couple blocks ended up a touch more wonky than anticipated, but somehow I never could muster the enthusiasm to do the un-stitching and start over. Oh, who cares! 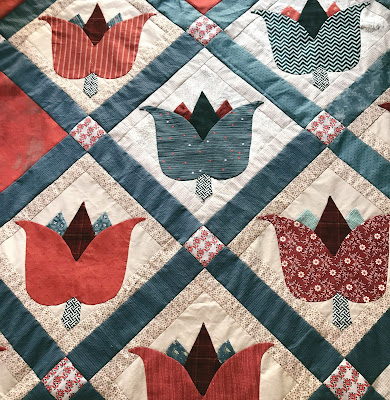 Name changed to 'Glory Be'
Once all the blocks were ready to roll, then it was time to decide layout. The original plan was for the 13 blocks to be set in three rows of three, with four other blocks in the in-between rows.Uh huh. Good plan. Except it looked terrible. Sort of squat and functional, but not at all exciting. 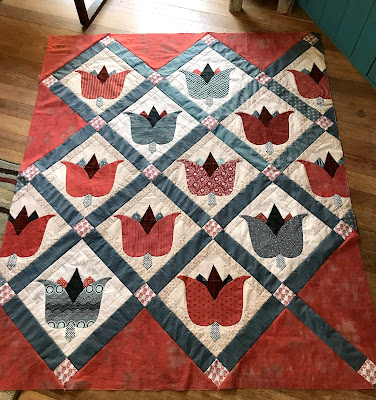 Another quilt top finish!
Can't be having that! You know me, I have to fiddle and fiddle until finally finding a solution that makes me all the way happy, if that's even possible. I considered making the quilt longer, but that would involve making five more blocks! Ugghh... What about dividing the blocks into two smaller quilts? And so on and so forth until the idea of working towards an asymmetrical layout began to appeal. 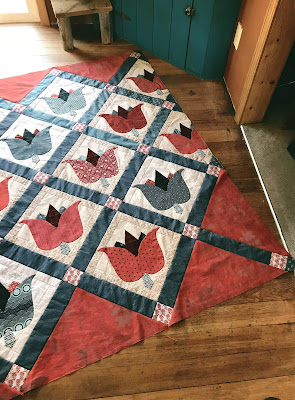 Loving the look of this quilt!
It totally makes some of you wince {and grumble}, but sometimes, part of a block just has to be sacrificed for the greater good. Once this decision was reached, there was no looking back! Then it was just a matter of puzzling the pieces and rows together. 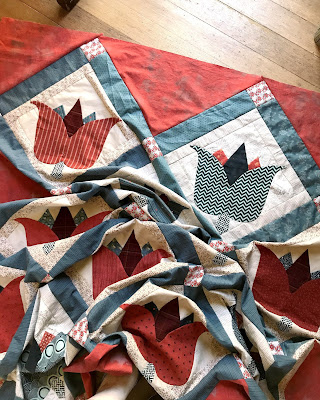 Solid color sashing working hard in this quilt
There are so many things to consider when adding sashing into a quilt, especially when the layout is 'on-point'. My brain has been so foggy lately, that I measured and then tripled measured before cutting out the setting triangles. I really wanted to ensure that all of the cornerstone pieces were included in the edges of the quilt, not cut in half like I would generally do. That was important partly due to the fact that I love the energy they add to this quilt, but also, it helped made sure that more of the chopped of tulip blocks were left intact.
Like always, just before cutting, I marked the potential outside edge, across the face of the blocks, with a fabric pen. {Use a washable one in the event you get the marking wrong!} After which, I stay stitched a seam {with the sewing machine} very close on the inside of that. Then, I laid everything perfectly flat on a mat, and using the rotary cutter, cut the straight edge of the quilt, leaving the stay stitching just to the inside intact. Don't want to cut that seam off! Does that make sense? The stay stitching is super important for stability both in cutting and then later, keeping everything from moving too much and/or fraying between now and total completion stage. Back in the day, I would try to do the stay stitching after the cutting was done. Uh uh. Much, much better to do it before! Makes for a significantly cleaner, less rippled looking edge of the quilt. 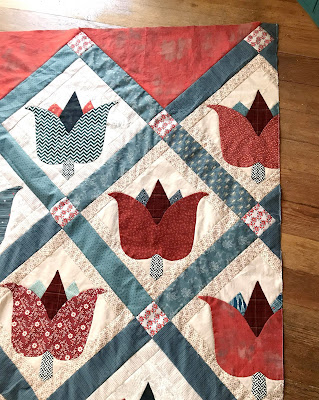 This tip corner was a bit tricky to get cut square
This red textured background fabric has been a lifesaver now on two different quilts. I love it! If it looks familiar to you, it was a fabric previously bought for a quilt backing and then the color ended up clashing horribly with the top side of the quilt. The first time using it, was for the Christmas Stars quilt where it added a lovely, velvety look to the quilt. This time around, it blends and plays off perfectly with the blue tones in the quilt and also seems to add a subtle richness to the quilt. I started this quilt without having the faintest idea what would happen in the setting triangles, so I'm thrilled with how wonderfully this fabric worked out! 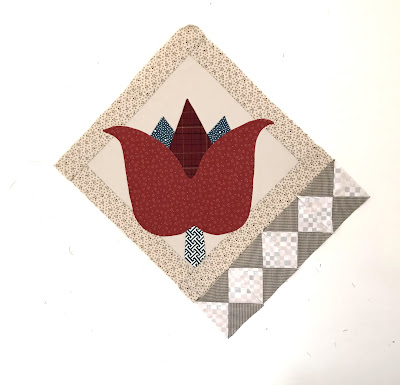 The original sashing plan
Many of you have probably forgotten, but from the very start this quilt was supposed to have hourglass unit sashing. After getting all the pieces cut out, I took a few triangles, sewed up a set, and did a quick audition. I talked about my foggy brain earlier?  Yep! These were all cut way too small and once sewn together into a longer unit, will be too short! A few moments of the sads, but what do you do? Not going to spend forever cutting them all down to a smaller size and then having to make even more! My heart definitely wasn't in it. 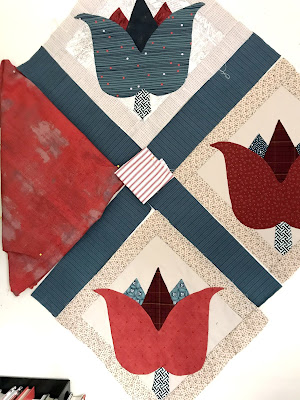 So the hourglass plan was ditched in a hurry and on to the idea of a blue sashing? Okay. That should work. Thankfully I had enough of a couple different fabrics that blended quite well together. A little bit of wiffle waffling around about the width of sashing, but nothing time consuming at all. I quickly moved on to the setting triangle fabrics which was all decided in a jiffy too. Wowsers! That went so fast it almost made my head spin.! Ahh... Not going to mention cutting the corner setting triangles a little too small. Nope, almost like it never happened.*wink  But then there was this little cornerstone square dilemma. Important to get it just right! 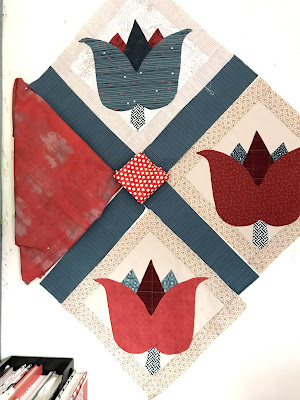 I tried a much lighter blue, the white and red stripe in the top picture, then moved on to perky red print fabrics. No, no and more 'no'. Then I saw this red/white/blue fabric in one of the totes and started feeling that super interested buzz of excitement. Hmm... Lets try a different direction! 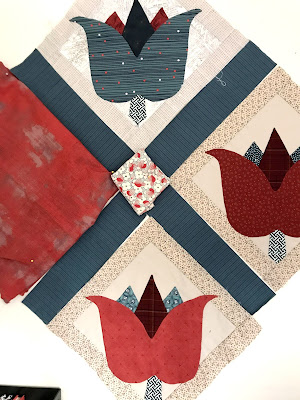 When I dug slightly deeper, this vintage-look floral fabric in the below pic caught my eye. After I got it up on the wall, I thought for sure it was THE ONE! Ooh, how it made my heart race with good vibes! 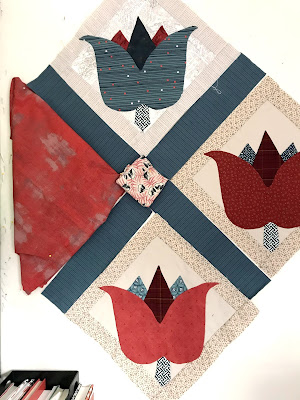 And it really was almost ' the one'. But.... me, being me, I had to dig all the way through to the bottom of the tote, just in case there was something incredible being overlooked. 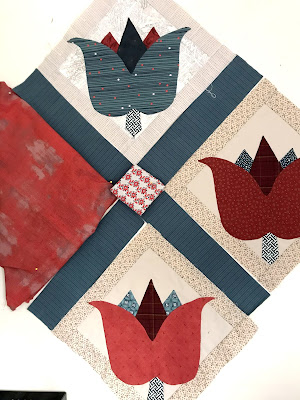 Wallah! Wouldn't you know it was at the very bottom! If I would have had more time earlier in the week, these would have been posted for all of you to throw in your 32 cents too. I did actually spend a little bit of time contemplating between these last two before cutting into the fabric. Put one fabric up on the wall and step back. Then the other one. Then back to the first one. Pros and cons to both of course and I'm sure many of you would have chosen something altogether different! Isn't it amazing how all the little choices eventually add up to an end result like this? The very beginning of this quilt started out with not having enough of the right background fabric and having to come up with a make-do solution. And on and on till we come to this particular point. I like it a lot! It feels patriotic and spunky and maybe a little bit sweet too. Good stuff! 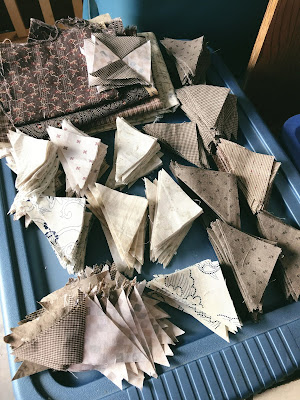 The abandoned hourglass unit triangles
Speaking of which.... These hourglass pieces were completely heartbroken at the idea of going to waste. While working on the tulip quilt, these weighed heavily on my subconscious. I was thinking about them, but not really. It was all very background. 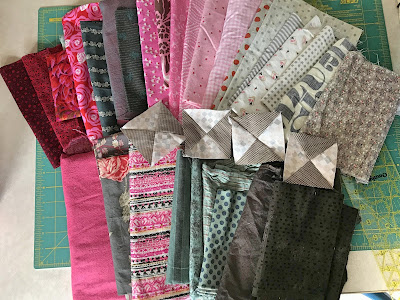 A color palette for the new quilt
Until finally it started to gel. Of course I had to nail it all down properly while the ideas were fresh! Still going to attempt an hourglass unit sashing in yet another tulip quilt. Are you just SO shocked? Gonna back up and take another run at that hill! hehe  This time around I'm going to use this tulip shape below, which was one of the mock-ups back when I was working on ideas for Autumnal Tulips. It just seemed meant to be, like maybe there was a series involved here all along. 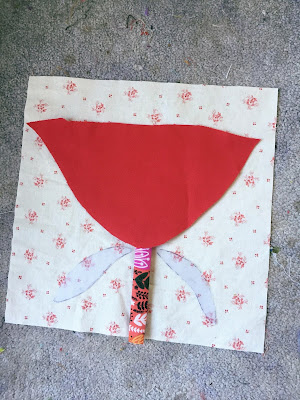 The shape of tulip for the next quilt
Don't know whether this is inspired or boring, but I guess we'll find out eventually. Tulips are definitely my thing so I'm willing to try! For now, the applique list is very long and these are decidedly not at the front of that line. There is plenty of time to work on chain piecing the hourglass blocks here and there, and.... maybe even change my mind if so desired? As most of you are well aware, there is nothing, and I mean NOTHING set in stone in regards to any of the quilting projects around here....
Linking up to Wendy's Peacock Party. On a side note, what do you think is the right thing to do in regards to linky party etiquette? Should we comment on everybody's post who bothers to link up? Or only the ones we really admire? Or the ones that are loaded at the time when we link up? Do any of you go back and check out the new links the next day or two after your own post is linked? I usually forget to do that. Love that Wendy seems very relaxed about the commenting herself. Helps take the pressure off ! I know what I like to do when it's my own Linky party, but I'm curious what the standard is for linking up to others. Never felt very clear about the 'rules'!
Written by audrey at 4:35 PM 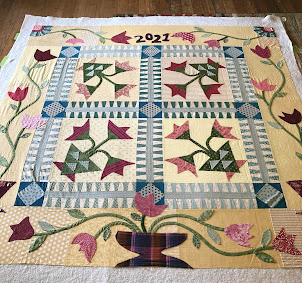