Woohoo! Comfortably Quirky is the first finish of 2021! I was starting to wonder if there would ever be one. This quilt was started in December of 2019. The general thinking was that this would be another 'Christmas' quilt for the seasonal stacks, but now that it's totally completed? Not so holiday-ish looking after all.

In fact, it's residing very comfortably on my bed right at this moment. This quilt got its design genesis from a rather funky looking quilt in the Roderick Kiracofe book 'Unconventional and Unexpected'. {Look at the December link earlier in this post to check it out.} I took that particular quilt and multiplied the basic design times four, and then of course, had to take a little bit of artistic liberty to make it all meld properly together.


While the original quilt looks charming with just a few circles, increasing the amount x 4 was perhaps a bit of overkill. Perhaps. There's really no regret here, in case you were wondering! There are some things you don't/won't know until you see it. That's just the way it goes when you're flying by the seat of your pants and making things up as you go along.


One of the things that I was trying to do, was to use up some of the old, tired green fabrics in the stash. Mission accomplished! The fact that I also used up many other older, difficult {but well loved} fabrics during the making was just bonus. I loved being able to finally work in a small piece of vintage green, a plucky blue and red recycled shirting, a dotty green/cream that never really played well in other quilts {but looks so wonderful in this one!}, lovely {but troublesome} florals and other various bits and pieces that just were never enough. You know how it is.

In that regard, this quilt is a magnificent success. You cannot even begin to comprehend how very pleased I am with the overall vibe of this particular quilt! Especially when viewing it up close and personal or draped over my bed. It's very, very good in the soft winter light, however the pictures try to portray it as dark and gloomy. Blame that on the photographer! Also, I'm always so pleased {and just a little bit startled too}, by how much difference the hand quilting texture can make. I should know better. Time after time, I am amazed to see a rather blasé quilt top take on life after just a few evenings of stitching. It's rather remarkable really and always makes it entirely worthwhile.


Though the timing was terrible, I am so, so happy that I actually stopped and added the applique tulips when I did. It would have been much easier to say, 'Nope, way too late for this quilt!', and just leave it be. Admittedly, the quilt was quite insistent and probably would have put up a pretty good pout. Lovely to see proof that these six little pieces of applique indeed are important and definitely help to make this quilt shine just a little bit brighter.


Next up in the hoop is the Hst Medallion quilt, started clear back in 2017! It's been a finished quilt top for quite awhile, but I kept ignoring it in the hopes that some quilting fairy would come and hand quilt it while I wasn't looking!


It wasn't meant to be I guess.*sigh  It's just that this quilt is SO LARGE! HST Medallion finishes out at somewhere around 103" square, which is absolutely ridiculous. I don't even know what I was thinking. Regardless, the time had finally came to move this quilt off of the unfinished quilt top list by hook or by crook. No sense spending a million hours sewing together a quilt top and then leaving it for the kids and grandkids to chuck into the Goodwill bin some day!


Would you believe it's been sandwiched and pinned since early December and even then other quilts got in the way? Yep. I'm such a procrastinator when it comes to this quilt. Maybe because it always feels just a little bit overwhelming?


Years and years ago {lets say about 15 years and not get too jiggy with the correct time frame}, I would set up a floor hoop every January for the largest quilt top resting in the queue. There would be a very intense four to six weeks while I quilted and dealt with grumbly family members over the monstrosity taking over the corner of the living room. Great motivation! Nowadays, those floor frames are long gone and it's just me and the hand held hoop on the couch. Which totally works. Uh huh. If I can manage to get the quilt into the hoop and a needle and thread in my hand to actually do some stitching....


So here I am, nine rows out from the center are totally hand quilted now! Lots and lots to go of course, but officially at a point where I am positive it won't end up being buried back in the quilt top drawers in a fit of pique. There was no way I could ever hand quilt this one during the summer months and well, it's gonna take awhile... Hard to explain, but where I'm at now, it finally feels like the rest is doable. Which it always was if you look at it from the perspective of 'one hoop at a time'. It just took getting a big chunk of the center done to be able to feel it. Don't ask me why that matters. Or why this quilt messes with my head. Best get going on it and hopefully bring it to a true-blue finish some time in the near future. Hope I don't run out of thread! 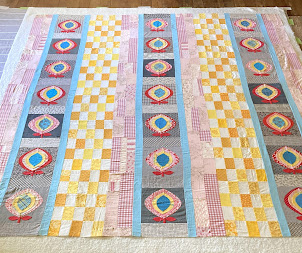