A Little Quilting and A Lotta Family

Would you be shocked if I said that life had been busy lately? What was it that I read the other day, something about our 'hustle culture' being the new norm? Yeah. Not by choice for most of us. I managed to squeeze in a few good minutes trimming off the points of the hsts and then throwing a few of them up on the wall. This isn't sewn together yet, still in full-on contemplation mode.All those hsts sewn together properly would represent four blocks to the 25-Patch HST quilt. The look is overtly {almost obnoxiously} scrappy, yet somewhat vintage in look and feel. Most all of the fabrics used are in a 15 year range though. There is probably only one fabric that would truly be of vintage era though. I'm absolutely loving the mishmash of colors and sheer unpretentious quality that's already shining through. The Inspiration quilt has nine of these 25-patch blocks so I'll start with that, roughly following the original makers lead as to value. After those nine blocks are sewn, then we'll figure out the rest of the quilt. Pretty sure there will be lots of leftover units to play with.

I seem to be in this rut lately of making myself finish up one applique project at a time. So weird. For years, when I got bogged down mentally, then I just pushed the project off to the back burner and started stitching on another. Now I'm acting like Sally Steadfast and keeping my nose to the grindstone until it's ALL done.

It was really exciting to finally figure out the little centers of the primrose flowers. I knew the fabric needed to be a in similar tones of faded black, but the fussy cut flowers in the this black fabric is exactly right. Don't you love when that happens?

Still hand quilting on the Moody 9-Patch quilt. It's only been a finished quilt top since February of 2021, but it seems like it's been in the quilt top drawers for much, much longer. I machine stitched-in-the-ditch between all the blocks before my sewing machine was fixed. Basically, the dual feed wasn't working properly which makes for all those stitching lines being less than fully in-the-ditch and more of a meandering trail of thread. Even with using a standard walking foot. Oh well. Made me a little mad at the time, but now I don't even hardly notice. Or care. Am sort of laughing at myself for expending so much energy doing hand quilting on a quilt that barely shows off the effort involved though. It's been lovely having it in my lap though! Such a pretty, deep fall look and feel going on here!

The entire family didn't end up being altogether on the big day after all, only about 45 persons or so. But by Saturday, all of my siblings were present at my mom and dads for 'pizza night'. It's become part of the holiday weekend to have one pizza night, an Asian food night and also a taco bar in the days following Thanksgiving. Anyway, on impulse because its so rare we're all together in one place, we found ourselves taking a few family photos of the siblings. Some smart-alecky person suggested we arrange ourselves in order by birth, and of course people started snapping pics for posterity. It was pretty funny getting it all sorted out and then later on somebody mentioned that half of us pictured here are Gen X kids and the other half are millennials, Whatever that means? 21 years between oldest and youngest in case you were wondering. My baby brother was only four months old at my wedding! lol
I don't really talk about this much because we got a lot of flack about it growing up. People have SO MUCH to say about people having more than four or five kids in their families. I always had to laugh when someone would say my four kids was a big family. Right.... You wouldn't believe all the things total strangers and/or supposed friends would say right in front of us kids or my parents too. And not expect anyone to get offended. It was crazy and really rude at times! You learn really quick who the real friends are! Once in a great while someone would have wonderful things to say to us and we'd all sort of relax and lose the defensive posture. Not that we care now, but as kiddos, it was terribly hard to take at times.
Mom and dad had 12 kids in all with 11 kids raised to adulthood. Let me just say that they were incredible parents to us all and never lived off of anyone or expected anyone else to pick up the slack. Two of my siblings {right smack in the middle and pretty much the bridge between 'older' and 'younger' families} have passed now and this is what is left of the tribe. We still feel their loss every time we do something like this but know it will only get worse as the years fly by. And the numbers undoubtedly shrink even more? Such is life unfortunately so we cherish the good times while we can.
I am the shorty, second to the left in this picture. Fun times and yes, I was bossy growing up. What can I say? As you can see, a few 'what are we doing here?' looks because of the relaxed attire, but who really cares in the long run? I actually think the pictures turned out better from not being overly scheduled and planned to the nth degree! We don't always get along super, magically, wonderfully well, but I know if ever I truly needed anything, I could call any one of them and they'd run to my aid in a heartbeat. You know how it is with well adjusted siblings, blood is thicker than water, but ooh... we also have memories like elephants! I had a great time telling one of my nieces this last weekend about a much younger version of her sweet mama.*wink
In other news, we've had snow and then a little bit more snow on top of that. The first two pictures were snapped by my husband a couple days ago. The first one was taken at his current construction/remodeling project approx. six miles from where we live {which is a whole lot closer to that mountain in the background}. It was such a cold, clear day, the distance looks much, much shorter than what it really is!
This next picture was taken just as he was driving through the outskirts of our little town of Pateros {less than half a mile from where we live}, but looking off to the left across the Columbia River instead of straight ahead at Billygoat mountain {seen in the previous picture}. 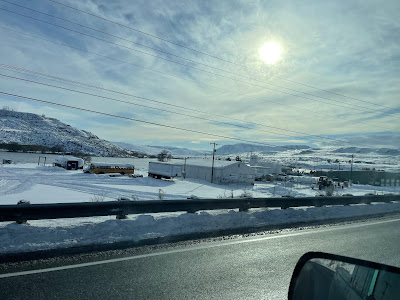 The sun is shining in Pateros, Washington
This last picture was taken by a friend of ours here in town who owns a little Airbnb. She snapped this picture while taking a walk along the Methow river, right where it dumps into the Columbia river {pictured behind the railroad bridge and also in the background of the previous picture. This is where our little town of Pateros sits, right at the junction of those rivers and nestled in the foothills of the mountain shown in the first picture. We really do have gorgeous views year around here, but in wintertime, after a fresh snowfall and  then the sun comes out? It's just incredible. So pretty.
And mostly we do love the winters here, but wowsers, it did come early this year! I have shoveled snow off and on in short little spurts for about three days now. Yesterday I slipped and fell splat! on my left shoulder, elbow and hip, thankfully only getting slightly bruised. Normally my husband would do more of the shoveling, but we all got hit by a stomach bug on the Monday after the big weekend and I'm the one who recovered the fastest it seems. I'm just way too impatient to wait around for him to do the work, even though my back and shoulders are crying out the entire time I'm shoveling. I am soooo out of shape! There is a huge difference between a needle and a snow shovel, but I hate having snow fall into my boots every time I head out to the garage, the dumpster or to the car. Ughh. Don't tell them, but I always miss my boys a little extra this time of year... 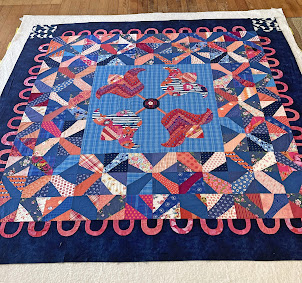