It's Always Better To Have the Prep Work Behind You

I've been busy, busy. Trying to get lots of applique prep done over the last weekend while my daughter was away on vacation. It was waaay past time to pull out Coronacrazy and just get moving on it. While the centerpiece has been done since January, the only thing accomplished since that particular push was the foundation work for this applique border. Letting it sit around and gather dust was only making me feel guilty and even more apprehensive about how it was going to turn out.

The thing is, the applique border to-be, was really only a figment of my imagination and an odd little scribble on paper. I believe the genesis for the free flowing leaves idea was from a calendar hanging on my wall throughout 2020? but I can't really remember anymore. All I knew for sure was that there was gonna have to be a lot of floor space for this prep work to happen, lots of internal debate and hopefully a surge of creativity and illumination. Yep, I was absolutely dreading it.

It took up the greater part of the upstairs floor, right at the top of the stairs for most of three days. It's an ugly carpet, so sorry for that, but design space isn't usually terribly fussy around here. I started out a little different with this particular border. First I spent some time free-cutting about 25 different shape and lengths of leaves in paper and then placing them along a vine. Okay, yes. More of that. This is the flowy vibe that I'm aiming for. No, not that, more like this? and so on till it started to click.
Normally I would get a feel for the look that I wanted {on a paper drawing or maybe a quick audition} and then cut out a whole stack of leaves in whatever fabric I had stacked up and ready to use for the border. Just place fabric shapes randomly and make things work. And though I had the pre-selected fabric at the ready, I also knew that I wanted the leaves arranged in a bit of a color wash. Okay. That could be a bit more tricky as the lengths of the leaves needed to vary as well. What comes first, the chicken or the egg?

This time, as you can see, I started with arranging paper leaves on one side of the top border until the look was just so. Then, I carefully selected the preferred fabrics and colors as I went, tracing the proper leaf shape onto the back of that fabric. Uh huh. I basically went leaf by leaf, sometimes getting into a groove where I could cut two or three out at the same time. Woo hoo! It was painstaking because I didn't have enough fabric to just waste it in a big flurry of optimistic cutting.
With the shape decisions out of the way, cutting one leaf at a time in the 'hopefully correct' color let me immediately see if the color wash was happening like intended. The ironic thing was, after getting all the leaves in place for the first total quilt view, I immediately started rearranging a few chosen leaves until the overall color was was simply a variegated look instead. Oh well. No one ever said the design process was easy, simple, straightforward or even made a lick of sense. You just have to roll with it till you hopefully come out the other side!

After getting through one half of the top border {and leaving the cut out leaves in place as a reference point}, I switched to the other side. Though I tried not to get too 'matchy, matchy', it helped to use repeating colors for cohesion. Then I worked on the bottom border etc. etc., always choosing to determine the tips of the vine leaf colors first. If I got stuck or spectacularly frazzled somewhere on a vine, I would switch to the other end of the border and work backward until I found a way to transition more gracefully. No sense working myself into a snit because a certain leaf didn't want to behave! Might as well take my attention elsewhere and give us both time to reflect.
It really did take a lot of time, hours and hours and hours in all. Now you know why I needed the upstairs floor completely free for days at a time! At first I just did a rough cut around the traced leaf shape on the fabric and placed them on the border as-is, thinking I could clean up the shapes later. Which I did in some places and others not so much.
As the borders started developing, leaves got shuffled and moved into better position, leaves got trimmed a little curvier or slimmer or shorter or whatever seemed to be needed. More leaves got squeezed into the space, or less. Other times a whole group of leaves was jettisoned completely because suddenly there was a brilliant idea that needed addressing! Some areas I fussed with entirely too much, causing the invariable confusion and despair. An opportune time to leave and take a good long break. Coming back later with fresh eyes usually helped tremendously to see immediately what the problem was and well, have a hope of actually solving it?
All in all, there is only about six or seven unused or discarded leaves at the finish, so I count that as a win! And I didn't run completely out of any important fabric, pull out any hair on my head or even have a temper tantrum just trying to have clarity in what I was trying to convey!! hehe  So yeah. Prep work is totally done, the leaves are removed from the corner areas and carefully labeled for later stitching. These borders are finally in the backup handwork bag and waiting for their turn in the hand stitching queue. YAY! I can't even imagine what was possibly holding me back from this particular phase of the quilt, can you?

I also finished up with the simple applique on the borders of the baby quilt, all borders attached and it's even sandwiched and pinned! This one is already in the hoop and I've been hand quilting on it for a couple nights now. So sad to have to put a pause on Bullseye Medallion quilt as I had finally made it all the way out to the outside borders. At this point it always feels like an easy couple nights till it's all completely finished, but I know better. I know, I know... The outside area generally takes much longer than we expect and well, it will still be there and waiting for me when the baby quilt is all done and ready for gifting.
While I still had the floor available, I went ahead and made time for stitching up the sashing strips on CrazyDaisy. Though I was pretty sure they would be a go, you just never know for sure till the auditioning moment.
Though it's not obvious in the picture, the cheddar and lavender squares seem a little bit 'flat' in comparison to the Daisy blocks. Overall I think that's a good thing. Gives the applique a chance to shine brighter. Like they need that? Hmm... Originally I intended to cut the sashing from a stripey fabric and make them fairly narrow strips. This way gives a little more breathing room, yet still keeps the energy high.

After seeing the blocks with the sashing strips and the cheddar cornerstone squares, I was not impressed with how blah that cornerstone color was. I finally settled on a deep purple batik fabric to use {probably not an outstanding choice}, but it does exactly as intended. Helps 'pop' the dark curved strips in the blocks and further define the flowers. Not every color/fabric used has to be exceptional to work extremely well 'in situ'.

This quilt was supposed to be a very blue quilt and I'm not quite sure what happened? Somehow it veered off into this wildly exuberant explosion of color. So very, very energetic and crazy, I'm actually starting to call it 'circus, circus' in my mind! So far the only thing that I regret about this quilt though, is the fact that it's going to end up square. I probably should have gritted my teeth and stitched the extra blocks just to make the quilt come out rectangular. I did consider that for awhile, even thought about leaving off one row of blocks, but no. That would mean ditching seven applique blocks! Ha. Not happening. I'm actually very ready to move beyond these wild {for me} colors and work on some projects in more benign colors for awhile! 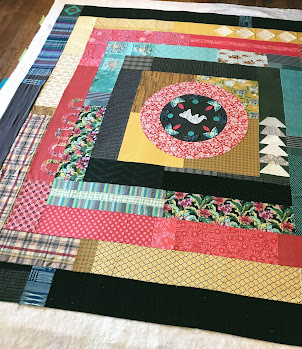