Gonna Bore You With Too Many Pictures of a Baby Quilt

Time just keeps slipping away! It took me forever to get down to business with the baby quilt. Mostly because I just couldn't decide on a design/pattern/idea. Baby quilts can occasionally be so easy to throw together, we often wonder why we don't make more? Other times, it's like pulling teeth to simply bring anything into proper focus just to get started!
I finally settled on a very easy-peasy block called the 'Bear Paw'. Sewn up in 6" blocks, it allows for a nice little chunk of fabric to shine through all the busyness of mixed fabric prints! So many times, {more and more as the years roll on}, I'm clear over in left field trying to use up the oldie moldy fabrics and I don't even think about what the new mama might like!
With this quilt, I was hoping to convey little boy vibes and also, a slightly urban, modern touch. If there would have been any large print text fabric, you can bet that I would have found a way to work that into the quilt too! But no, it wasn't to be. The great thing about this quilt was that I actually found a way to challenge myself with using up some older, slightly off-color blues, while somehow still avoiding the 'tired fabrics' demeanor that some quilts seem take on so easily! Yay! Definitely something to smile about!

Life seems especially stressful lately, and as you all know, I've almost always got something that is worrying the corners of my mind. Chain piecing the little hsts for a low-pressure baby quilt was strangely soothing, though as usual, they didn't quite turn out exactly square! Oh well. This method is fast and easy, but it's never been super good to me as far as precision goes. After each block was sewn I kind of, sort of squared the completed blocks to an even size and called it good.


Most of the time I don't end up making extra blocks on purpose, but this time I ended up cutting out several more of the lightest blue blocks and also, on impulse, cutting out two extra blocks with the red for background instead of having all the red in the 'paw' position {as per my initial quilt guidelines!}. That's because there was only a very little bit of that particular red available to use and it seemed so perfect for this quilt. Why leave it out? Plus... the brightest blue batik used in that same block was the very last of a small chunk of fabric from, ahem! twenty years ago! Crazy, huh? At first I thought it much too bright for the quilt, but in retrospect, can't imagine the quilt without it.


Once again, this is a quilt inspired from, {but not exactly sewn up according to}, a quilt pattern saved in one of my Inspiration Binders. This pattern is from the October 2001 American Patchwork and Quilting magazine. Some patterns are just classics, aren't they? After whiffle waffling about and not coming up with anything better, I just decided to quit fighting and see what could happen, trying to make bear paws in these particular colors. There are just some things that my mind refuses to 'see' and no matter how I tried, could not imagine the outcome of these fabrics and colors in any design rendition whatsoever. Besides, what was there to lose?


Though I didn't originally intend to put the outside border on the quilt, one of my daughters basically told me that it did, in fact need one. After finding the dark blue solid fabric and seeing how it emphasized the bright, sparky bear paws, I had to concede. The quilt was probably too small at 36" x 42" before the border addition anyway!


One of the best things about making a baby quilt is the ability to repeat the same fabric used in different color ways and not even cringe. Normally, I'd never, ever in a million years, use the red with blue polka dots and the blue with red polka dots in the very same quilt! And then, look! I even used one of those fabrics again for the binding! In most of my quilting efforts, I'd think that was much too cheesy and lame looking and go earnestly hunting for something similar but very, very different! This time I sort of rolled my eyes and thought it mostly sweet...


Overall, it's just a simple little baby quilt. I know that! But the reality is, that I'm really, tremendously happy with it. It works. Even the scrounged-from-the-stash, 'birds at the coast' backing fabric doesn't make me lose a beat. I started with a small stack of fabric that intrigued me and then did my best to make them look interesting all together. Not a single fabric was bought brand new and in fact, I used up a couple very old {to me} fabrics and even part of an older, upcycled mens shirt {the yellow/black check}. That feels very good. Even the batting was pieced from off-cuts of other larger quilts!


I quilted between the blocks with my go-to, stitch-in-the-ditch thing and then moved on to, very reluctantly! to a bit of hand quilting. I had hoped to have it sandwiched and pinned, plus quilted all in the same day, but no... My conscious {and the very persnickety quilt} just would NOT let me be. Apparently, I must get out the perle cotton and make a stab at giving it a bit more character. Of course, it looks so much better now with the little bit of texture, but really? Will baby even care? lol
And yes, it's slow going, but I'm also making a little tiny bit of headway on some of my endless applique projects here of late. As of earlier in the week, all the Love Apple blocks are now completed and ready for input into a larger quilt plan. Love them so much! Crossing my fingers that I can do justice to them.
Currently in the hand work bag, is the much neglected impulse project that was started back in August of this year. After that, it will probably be the Melon Patch blocks which have been languishing since about March? They are starting to get quite angry at me so best to think about giving them some attention! 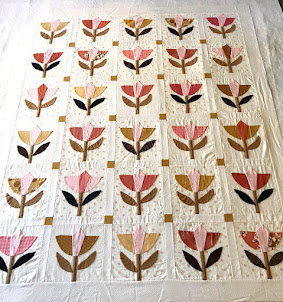