Making It Up As I Go Along

The hardest part of blogging lately is actually making the effort to write the post. I usually don't wanna these days! Then, deciding what to touch on, what to highlight and even more importantly, what to leave alone. Ughh. Does anyone even care about quilting these days? Such crazy, crazy days indeed. Oh well. Quilting is what makes me happy, so here goes!
This is the quilt that was started impulsively back at the first of May. Mostly I just wanted to chain piece and not think about design. It's now a completed quilt top, so yeah. Really fast finish for me! I've had the fabric stacked up together and simmering though, for well over a year. That was during a time when I purposefully dove very deep into the red stash tote in response to the Red is a Neutral AHIQ challenge. The first two fabric pulls of red didn't end up quite making the grade {here's the challenge quilt with the fabrics that won out} but I couldn't just dump these straight back in. Oh no. There was just something about them that pulled on my heartstrings.
Maybe it was because there was a small piece of a leftover plaid from my youngest sons baby years {do you know how little fabric is in a long sleeved toddler shirt?}. Regardless, it was the 'go-to' fabric stack when I recently wanted something simple and low-key to immerse myself in.
I am so very satisfied how successfully the lighter areas of the quilt turned out! I consider this quilt a victory because... one of my worst default decisions is usually to pick a whole stack of fabric in a similar color with very little variation in tone or pattern. Something I'm working on changing, little by little! This time, I deliberately stretched and made sure to have better range of colors, albeit in the light to very light spectrum. There are creams, lighter pinks, light grays and in addition, very light blues. If you look closely, you will also see that on the rare occasion, medium-dark pink fabrics from the darker areas were purposefully used in place of a light triangle. But overall? The lighter area definitely reads 'light' {without being choppy}, even though up close there's more going on than perhaps is normal with my efforts.
I kind of love the energy and depth it adds to this sweet looking quilt! Those unexpectedly placed pink triangles really aren't dark enough to fully stop the eye from perusing the quilt. None of that, 'Hey! Those are in the wrong spot!' moments, it just adds an amusing utilitarian touch. I like to think of it as whimsical, unstudied, and kind of old fashioned looking! Basically, I just divvied the cut triangles up into 18 stacks of half light and half dark and started sewing, one light triangle to one dark triangle, one after another. And then once in a great while, threw a darker pink over into the 'light' pile just for the fun of it!
After I got the initial pairs sewn up and ironed, then I started joining those pairs together. Then four with four, until a whole row was able to be sewn together. The most important thing being that there was no repeat of fabric sewn closely together. Otherwise I just grabbed and sewed. Once I got larger sets together then I quickly laid them out of the floor to see if the row looked okay, then sewed it up and moved on to the next row!

The page you see pictured below has been in one of my inspiration binders for close to a decade. Though I didn't closely follow the pattern directions  {my triangles are larger for one}, it's from the 2009 July/Aug. issue of  'Fons and Porter' Love of Quilting magazine. For a rough idea of how to make a similar quilt to mine, cut out approx. 100-5" squares of dark fabrics and 100-5" squares of lighter fabrics. {I think I had to go back and cut just out just a few more when I decided to add extra rows!}. Cut them on the diagonal and then cut on the diagonal again. Sew light triangles to dark triangles in sets {iron with a light touch!}, until you have 16 rows measuring 85" plus. Sew 2 rows measuring approx. 65" for the top and bottom of quilt.

Cut 15 strips @ 2 1/2" x 82" in whatever alternate strip fabric/color you like. The fabric that worked best for me was a woven so I intentionally cut my strips on the lengthwise grain for better stability. Since I had slightly less than 2 1/4" yards available, this meant that I had to cut an extra strip and sew length to length, then later measuring and cutting each strip at the desired 82".

Lay out all the pieced rows in the configuration shown below {light triangles to the outside} or perhaps like I did, {dark triangles to the outside}. Though the quilt is very scrappy, I did try my best not to have identical fabrics lined up in rows exactly side by side. This meant of course, that I had to change out pieced rows here and there until the color flow to the quilt worked the best.
As most of you know, my piecing isn't ever strictly precise, and so I took the {deliberately} extra long pieced rows and fiddled with them a bit at this placement stage. Moved them a little up or down so as to further distract from the fact that they were never going to match up in straight lines at the point of the triangles all across the width of the quilt. That meant that I cut a little off the top of some and a little off the bottom of others, whatever it took to make them all 82", but still have a good 'mismatched' flow overall. The one thing that I did NOT want to see happen was for them all to start out with an intact triangle at the top of the row, and then end up cut off willy-nilly across the bottom of the quilt! Then it would be altogether too obvious that I was a failure!

The top and bottom pieced rows ended up being cut at 62 1/4", but really, it's best if you measure the width of your quilt in three places, and then take the average before cutting. One thing that you might like to know too, is that I did not trim all the pieced rows to an exact width of 2 1/2". What I did do is take a ruler and trim a straight edge alongside both sides, just eyeballing things as I went. After all, it is a utilitarian look quilt, so who really cares? The original quilt in the picture dates back to the late 1800's. What do you want to bet that it isn't perfectly square either!
On a different note, the new AHIQ challenge has been issued! For the first time in a long time I haven't even finished up the last challenge, but that won't stop me from thinking about the new one. This one is called 'Positive Thinking' and one of the ideas is raiding our closets for the start of a new quilt. Making do is something I love so of course I promptly went looking to see which shirts of mine and my husbands could be spared. Shh... hopefully he won't notice the empty spot in his side of the closet...
Then I looked sown at my choices and had to smile. Me thinks this latest quilt top has greatly influenced these particular choices! {Not that I had very much to choose from as we do need to have things to wear} Whatever, I went ahead and ditched the darkest fabric {for now} thinking to uplift the color mood {positive thinking?}, and went looking in the stash totes for another spark. I guess that's going to be orange. Instead of putting the cream stripe {used in the Strippy Triangles quilt} back into the totes, I added it into the stack too. Grabbed a white/clue/orange/pink vintage fabric that never seems to find a good home and just kept flitting around in the stash totes till I felt that little hum of satisfaction. Okay. That's a good start. Will leave it there to marinate until some more definite ideas for a design gels! Will probably end up calling this quilt 'My Happy Place', but only time will tell how it turns out....
Written by audrey at 5:11 PM 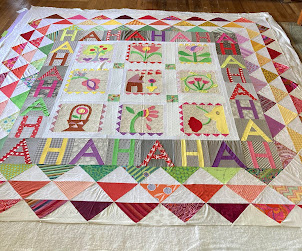