Ta-da! The Hst Medallion is a Finished Quilt Top!

It's been awhile.  Earlier in the year I had determined that this quilt top was going to be finished up just as soon as I could drum up the energy. Eventually it became obvious that I would never truly feel up to this particular task. And so I set a timeline, made promises to myself. And finally, there was nothing left to procrastinate over or 'accidentally' nudge in front of this difficult project.
Ughh.. Whose idea was this to recreate this antique quilt anyway? Pretty sure it was mine. Regardless, I have trembled in my shoes a time or two over the amount of work involved. I like dreaming up ideas, not sewing hsts and other mulitiple border units for literally days on end...
You have to know it was a LOT of work. So many hours spent on this quilt. Mind numbing amounts of time. Crazy amounts of TIME wrapped up in this quilt. Am I repeating myself? I think I might be repeating myself....
Cutting. Sewing. Ironing. Trimming. Sewing. Measuring. Pinning. Sewing. Ironing. Repeat and rinse... Cutting, Sewing, Ironing... I thought it might possibly never end. Obviously patience is not my strong suit these days.
I worked a little bit on the accuracy issue with this particular quilt, but I'm still me. Oh, am I ever! On occasion, it feels good to know that seams actually can match up, that everything learned has not been lost. And that seemed to pay off, until it didn't. In the end though {which is all that matters}, the quilt turned out relatively square. I'm very satisfied with 'relatively' and know that the planned future of hand quilting will, um... distract from anything obvious? Make it look amazing? For sure, make me forget about any supposed inadequacies!

I did wonder about not using pink for the square in a square border. The original quilt went off on a completely different tangent, color-wise, at this point. Nothing auditioned hit the happy button though, and almost all of the fabric used was dug straight out of the stash totes. Buying new would have had to involve strong motivation for its 'rightness'. When I couldn't determine a color that would almost definitely make things sing, then I went ahead with more of the pink. Oh well. Honestly, in some ways, I'm a little disappointed with the look. Playing with values with the blues and pinks apparently limited other color-use though. At least in my minds eye. That's the only thing that makes sense.
Every single strip and border had to be sewn on with lots of pins keeping things where they needed to be. So many seams.... I had to take a million breaks and go do laundry or file my nails. Do the dishes. Something really, really important. Whatever. My primary goal {quilty-wise}, was to not work on any other quilt, other than hand quilting which is always fair game, until this quilt was crossed off the list. This was a nose-to-the-grindstone sort of finish it up project. Many, many times I questioned why. Why? Why did I think the last two border additions were so important?
The last two borders measurements were cut out knowing that every single strip would undoubtedly end up being 'off' by approximately half an inch. At the very least. There was just no way I was cutting the pink squares or the geese units in 16th inch increments. I made an executive decision to not stress over perfect math. Ahh.. I do know myself so very well. Because it worked out just fine with my oh-so-accurate piecing. Nothing is ever exactly the length it's 'supposed' to be around here!

The pink strips ended up being more accurate than the geese ones, maybe because there are less of them per border length. All I had to do was lose between 1/4" and a 1/2" per length to make the borders fit. The flying geese borders were a bit trickier. Even going by the 'math', I somehow mis-figured by a lot. Each flying geese border should have had 64 units per side. Uh huh. That did not happen because I somehow ended up with 60 per side! The thing is though, I rarely ever trim them to an 'exact' size before sewing them into a border. So yes, you could say that I totally set myself up for variable border lengths! My feelings are, if the flying geese units are trimmed straight on the top and bottom sides, then they're good to go. Perfect quilts are so... boring!

I also decide what is most important before diving in with my make-it-up, make-it-do, make-it-work sort of work ethic. For this quilt? Keeping the tops points of the geese. That was the number one goal! After sewing on both side of the geese units, there will definitely be some side points disappearing into the seams. I know that. If the geese keep their pointy tops, everything else is well camouflaged except from the pickiest of quilters. And they can go jump in a lake!
To recap, the end goal was only to have borders that {fingers crossed} did not make for a wavy-edged ,waving hi! sort of quilt. Count the borders. This was a LOT of measuring and fiddling and fudging. Though I started out with a 'goal' measurement per border, in reality, they just had to fit nicely. Most of the black strips were used to whip the stitching errors back into place. You don't know how many times I had to grin at the original makers probable intent at the 'why' those specific strips were included. Wonderful design element, but wow! so genius for a subtle, but consistent course correction. Just for the record, I did eliminate one border from the original quilt look. Increasing the size of the hsts at the start made for a problematic finished quilt size
Most of the time I don't take pictures while family members are at home. They would think I'm a weirdo, right? Somehow today, I got caught. There's that hypocritical thing that happens when moms do things they've always yelled at their children for doing. Who stands on a couch??? Seriously?
Well, this quilt is obviously too big to take be taking pictures of inside of the house. I'm quite positive that other quilters do like I do though and make the best of what they have to work with. Including standing on the furniture if that's what it takes!

The spot where the best quilty pictures are taken was just kind of a joke today. That place works best for lap sized quilts and maybe bed size quilts if they are more narrow. I included the picture below so you could know how much bigger this quilt is than what I normally try to take pictures of. Perhaps we could get rid of the dining room table so I'd always have enough room, even for the biggest of quilts. lol
Maybe too, I can somehow bribe my children to be quilt holders for me once again. Right now they seem to think they have better things to do, like take funny, ha ha pictures of mom doing things she hasn't ever liked for them to do. Did I mention that sewing this quilt together was quite tedious? ha! Only once or twice. I didn't ever feel very creative about the whole endeavor, to be perfectly frank with you. The design was already set, the colors mostly repetitive and the entire thing was more about implementation than true creative brain storming.
But I love it anyway. All 103" inches of it. I did it! Yay me! Now I'm left wondering if I'll ever let anyone use it after it's truly finished up some day in the future?

I love getting comments and always try to respond via email. If you aren't getting replies back from me, try leaving your email address within the comment. Due to Blogger changes, I've heard that some people aren't able to leave comments here at all. In that case, you can always email me at audkateaster at gmail dot com if you'd like and I'll respond from there. Thanks so much for visiting!

Current Quilt in the Hoop 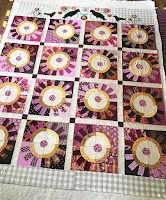