String Play a Reminder to Keep Playing With the Scraps!

Picture heavy post! String Play is a completed quilt now. This is a quilt made almost entirely from my scrap bin. Before quilting her {I want to call the quilt a 'her' for some reason}, I would have said she wasn't one of my favorites. Now I'm completely besotted. There's just something about a scrap quilt made up of hundreds of little pieces from other quilt projects that really gets to me. Upon starting this quilt, I dug through my scrap bin and pulled out specific colorways. As you can see, this quilt does not have any green--it's not the entire rainbow. For me, a crazy, million-pieced scrap quilt has to have a certain level of control or it just feels like chaos. Which just makes me nervous.
I've come to realize the value of a pre-sort. I pull fabrics in specific colorways, pushing the boundaries as far as I dare. In this case, the yellow and golds included some rust and orangey tones, and of course, plenty of brown. The purples went all the way into black, excluding most lavenders. Pink colors included the entire spectrum from the lightest of pinks clear to the rosiest of red--no bubblegum pinks or tomato reds allowed, but yes on the peachy, apricot pinks! The blues included a wide range as well, starting from lightest of light all the way to almost black and I skipped most of the aqua tones I stumbled across. This kind of 'control' really helps to establish cohesion in the new color family as the quilt strips started being joined together. I tend to leave the different colorways in separate totes while I sew, randomly grabbing the strips as I choose to.
When I was working through making the scrap blocks, the only extra fabrics I added were yellow, gold and a reddish purple. They were pieces that I thought might help carry important colors throughout the entire quilt as this is a largish quilt and I was running out pieces from the scrap bin. It helped that a couple of the fabric pieces were very sentimental for me, being pieces from my late grandmothers stash and a shirt from my deceased brother.
Before, I would have said this one was a somber, moody sort. But after quilting her, I've discovered she's a soft, rich, comfort giving quilt and I sincerely doubt she will ever be given away. Honestly, I am feeling as good about making this quilt as any I have ever made. And what does that say about me and my quilting?
It's a timely reminder to make time for sewing from my scrap bin. There's a lot of joy to be had from taking the bits and pieces and trying to make something beautiful. After the initial fabric sorting, there's also a lot of freedom in grabbing and sewing strips together without worrying about what they'll look like snuggled up next to each other. In this method of quilt making, we'll often find ourselves wincing at the pairing of fabrics we're sewing together. And over and over we'll find ourselves delighting in yet another pairing! It's a different sort of process, but it can be very revealing to those of us who get caught up in controlling the color in our quilts. We have to learn how to let go and just allow the fabric to tell the story it really wants to tell.
I wish this sort of quilt could have happened around here even ten years ago, but I was too unsure--too insecure about the outcome. I didn't know how to tame the scraps without losing their innate goodness. And I tend to forget now how working with scraps helps me out in the rest of my quilting.
Did you notice the entire quilt was stitched on my machine? I did it. I actually stitched the entire quilt on my recently serviced Bernina! About halfway through the tension started giving me problems again. It was stop and go, fixing and adjusting clear to the end and yes, the machine is going back in the shop once again--for the third time this year.*sigh  I won't bore you with the details. Just hoping this time will be a true-blue fix....
Written by audrey at 11:06 AM 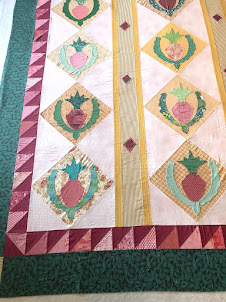