Another Difficult Quilt Top All Wrapped Up!

Here it is! A completed quilt top for the Positive Thinking challenge over at the AHIQ blog. This prompt was introduced in June of 2020, more or less encouraging us to keep going with whatever form our creativity allowed considering the stresses of the year. Doing anything 'positive' based seemed like a reach at the time {and even later}, but turned out to be a really great idea. Most of the intention behind what I do is for a cozy, happy, comfy outcome, and it was a timely reminder to keep on trying.

It was also suggested that we might want to chop some of our clothes up in the getting-started phase. {Begin with the comfortable and familiar.} I cut up about six or seven shirts and used them to determine the base of the color palette moving forward. The cream print fabric behind the raspberry pink letters {and those same pink letters} are from two of my favorite shirts that I wore for years. The blue shirting fabric in the middle of the quilt is from a barely worn shirt from my husbands closet, and then there are two more of his shirting fabrics that made it into the quilt as clamshells. The other shirtings were dumped into the stash totes without being used at all. No worries, one of these days I'll dig them out and introduce them into yet another quilt!


So yes, those specific fabrics being used mean something to me, causing the quilt to feel a little more special. The decision to attempt another 'wordy' quilt was actually quite simple when I thought about trying to project positivity. It's all in the message, right? Coincidently, there was a suitable one that had been pinned up on a board in my quilting room for eons.
Cutting and sewing letters together doesn't take a tremendous amount of creativity once a person gets started. It's more of a formula and that seemed to be a good thing last summer. Like maybe I could coast through at least part of the process on auto pilot! Ha. Of course there's always the phase {or two or three of them} where everything comes screeching to a halt and Very. Important. Decisions. Have. To. Be. Made. And it's usually in the details that later appear so thoroughly nonessential, but whatever. I made it through and finally got to the puzzle, getting the words and background to fit together in a way that hopefully everyone can read!


I ended up with the cream/black pinstripe fabric as the background because I loved the way it blended with the one cream shirting fabric especially calling out to me. The old fashioned charm was irresistible and also, there looked to be enough to hopefully take care of the entire background. Generally I'm okay with mixing and matching background fabrics {making-do}, but wanted something more controlled this time around. The stripe made me a bit nervous initially. Stripes?? But after I made the decision to put each word into its own 'box' of sorts, then the rest fell into place and started making more sense.


There were plenty of stops and starts getting it all pieced together. Energy would run very thin on the ground occasionally. What am I doing? What am I actually trying to accomplish? If I do this, use that, then where does that leave the emphasis of the message? 'Cuz you know, changing up the value of some of the colors per words, makes a huge difference in how the message could come across!


Fabric usage was carefully planned out ahead, but you can only do so much because of the waste involved. You can only imagine how thrilled I was when the cream shirting behind the pink letters was just enough and then later, when I was trying to puzzle piece the entire background into place, having the perfect amount with barely a scrap or two leftover!
Originally I wanted every single word to have the same exact cream shirting background but it simply wasn't possible. Waahh! That's why I paused part way through the letter making and spent some time considering. How do I move forward in a way that doesn't mess up the whole {imagined} look to the quilt? Eventually I just had to do something and leave it up to chance as to whether or not everything could/would come together. So that's where the blue background shirting came into play. Off on another tangent and we'll just have to see if it makes or breaks the quilt!
Also, the greater background was pieced intentionally with the stripes positioned on the vertical. All except for the very bottom of the quilt where I had no choice but to sew a narrow strip on the horizontal. It was a scary hairy determination to make as I worried it might 'waste' too much fabric and potentially leave me lacking enough to finish. The main reason it seemed important to deliberately choose one direction or the other was to eliminate extra chaos from fabrics being placed into the background willy-nilly. Since the theme was to be 'positive', it felt necessary to at least try to eliminate as much noise as possible. So yeah, that's one more area of this quilt that makes me super happy. It's a very small detail of the quilt, but almost boggles my mind. Lets just say it again.... the stripes are all going in the very same direction!!


Once the middle of the quilt was totally pieced, then I let it sit for a good long while. It was tempting to wrap it up and say 'It's a finish!', but honestly, the whole message thing was a bit too much for the totality of the quilt. I almost wanted to say in return, 'Oh yeah? So what?' With nothing but words to look at on the quilt, it seemed to make the quilt feel almost aggressively opinionated and I didn't want that vibe. Besides, I was pretty sure it needed applique. I mean, lets be real. How could there possibly be that much background space on one of my quilts, and not have a flower somewhere? It was always meant to be.
A couple months went by and the quilt decided that it probably needed to have borders. Almost any border would do, but didn't clamshells sound interesting? So I pondered and played with the idea until coming up with the scrappy 6" clamshells plan. Big enough to more easily learn the new-to-me technique, yet not so small as to get buried in the minutia of 'not quite good enough'. Mistakes were made. Things are far from perfect, and yet... I love it! Adds such a wonderful exuberance to the quilt. Definitely helped lift the quilt into a place of confidence and meaning without the overbearing quality it had before.


And then before the clamshells were completely finished and attached to the quilt, I finally settled on the applique flower addition. They are MUCH brighter than I ever intended, so in-your-face happy to be on the quilt. Wowsers. Dial it down a bit, could you? hehe  Why does it take more than just words though? They just aren't enough by themselves sometimes, especially on quilts. In fact, at the very end of adding on all the applique, I felt compelled to add on the little curly-cue or whatchamacallit thing as extra emphasis there on the bottom. Like an underlining of intent that I mean this. I feel this. Does that make sense? Laughing at myself here because the quilt was a little too overbearing without the border and applique and then after? Not quite serious enough. These quilts. They just love to run us in circles, don't they?
I know that not everyone will appreciate this quilt as much as I do {already figured that out by showing it to my mom}, and that's okay. Personally, I'm very, very pleased to have pushed through with this particular challenge. It was a good one in so many ways! There were definitely times that I sincerely thought the quilt had lost its way. What a drab little nothing of a quilt! And then, this. Plus, I finally got over my fear of playing with clamshells! Just goes to show that attempting the occasional challenge can take us on an unexpected, but wonderful adventure! Next AHIQ challenge is Symmetry/Asymmetry. I'm only a little behind on getting started! 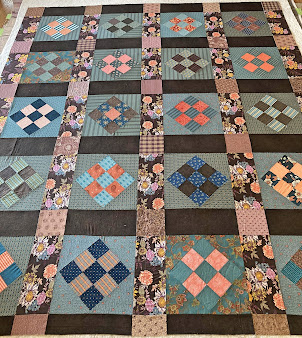