We're mostly doing fine, just feeling headachy and stressed. Very thankful that so many of the people we know and love have been able to return already to an intact home. Today though, the fires are a few miles away and across the Columbia river. Much closer than we can possibly be happy about. No evacuation notices for our little town just yet, but it could come. Uggh. I've got a file box of important papers ready just in case, but nothing else. We're just tired. Weary. Sick that this particular fire was started intentionally. Some people have mental health problems, that's all I'm gonna say. 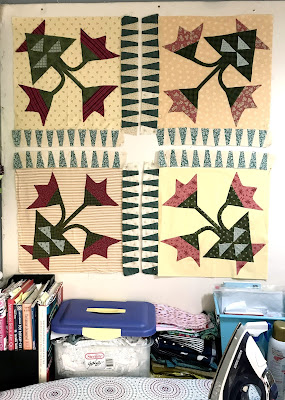 4-Block Tulip Medallion
In an impulsive move, I decided that there really should be something hanging up on that little design wall of mine. There needs to be something to look at and consider whenever I come into the quilt room. Something that doesn't take me having to pull it out of a tote just to look at. Decisions are hard right now. Even the silliest of ones. 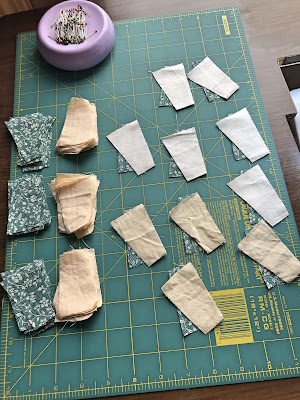 All the pieces were cut using a small template
called a 'Mini Dresden' I picked up at Walmart
So  out came the 4-block Tulip quilt project. You know, the boring blocks? I'm making these pieced sashing strips to frame them. All the blues were cut strictly from the scrap bin totes and so the straight of the grain isn't always exact. I'll deal with the foibles of that later. Eight more sets to go and then I'll have to figure out the inner strip color and all the cornerstones. Probably gonna be applique there. I mean, why not? 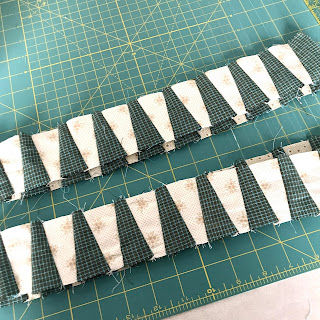 Trying not to man handle them too much!
I've also been plodding through the steps to bring the T blocks to completed quilt top phase. This isn't a particularly inspiring quilt top, but all of it has come directly from the stash totes or a cut-up plaid shirt or two. It's kept me busy in a totally non-pressure way. 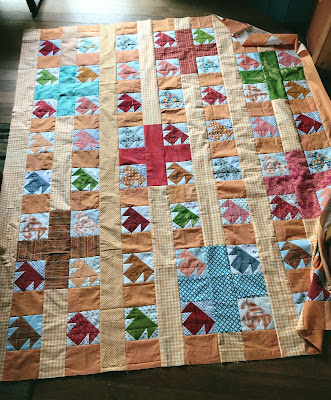 Vintage T quilt top is completed!
In this quilt I focused on 'old tired oranges' and found some success with using up some languishing bits. Like I said in a previous post, the color palette was found in one of my favorites of my dads well-used plaid shirts. I'm pleased to say that another of his cast-off plaid shirts has also found its way into this very quilt. I've had it for a very, very long time and never found a good use for it until now. Seems rather fitting. And yes, he's still alive. Mom and dad both are, though getting more fragile with every year it seems. Much better to make this sort of quilt now than later when I would cry buckets, right? 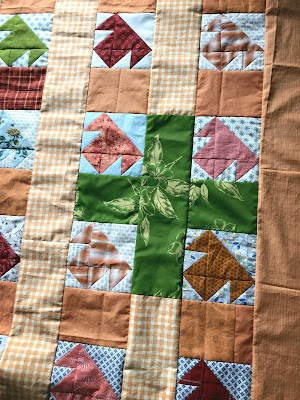 Loving this green fabric so much...
I changed out the fabric on the plus block below three different times. Or was it four? Don't know why I even bothered as eventually this quilt will probably be used as a comfort quilt. Or not. There is that sentimental attachment after all! Some of the smaller orange rectangles are pieced as are the longer orange strips. It's all make-do and somehow sort of sweetly old fashioned. I don't love it, but I'm happy with the simplicity and {un}pretentiousness of it all. 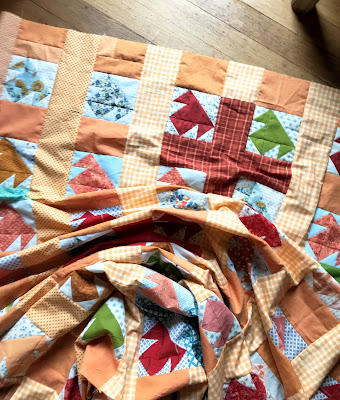 It may not be special, but it's keeping me busy...
One evening I couldn't settle and finally went scrounging for a new fabric pull to cheer myself up. Funny how melancholy it looks with only blues, greens and blacks being represented, ha ha. Not so cheery after all unless you're a quilter. Then you probably understand.  Guess it will be a moody Judy sort of quilt if/when I ever cut into the fabric and give it a go!
I also have given the quilt room another good tidying up in the past week. Had a lot of fun opening up all the smaller totes of fabric stacks and also gave all the simmering stacks on the counters a good long look. Nothing went promptly back into the stash totes, so I'd say there's still some potential there in each and every one. In fact, my heart actually did the little 'pitter-patter' thing just imagining a couple of these worked into a quilt design. Couldn't quite bring myself to actually cut into anything this week, but ideas are slowly bubbling up in the back of my conscious. I can feel it happening. 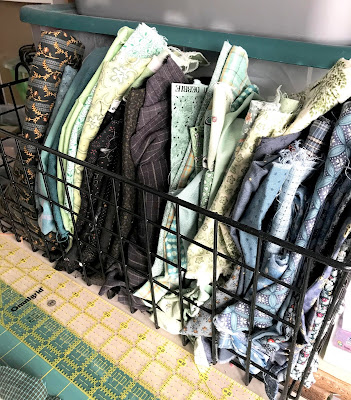 A new stack of fabric to think about...
Finally found a window to watch an episode of 'The Quilt Show' featuring Sujata Shah and Freddy Moran. You can find the link over at The Root Connection though time is running out to access it for free. Am so glad I took the time to watch this as both quilters are long time faves of mine. Really made me aware {once again},  of how much I NEED a source of creativity in my life! Especially right now. Wowsers. Some nights it's all I can do to pick up the hand quilting hoop and stitch part of a hoop. The thing is, no matter how difficult it seems to be to get started, I always, always feel so much better afterward. Crossing my fingers this publishes properly as our Internet has been very erratic this past week. So there you go, another post from Debbie Downer desperately trying to keep her chin up. Things could be much, much worse and we're thankful they're not. One day at a time!
Written by audrey at 4:59 PM 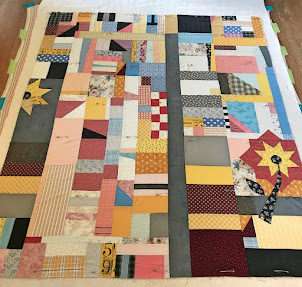