So You Want To Make a 'Tree of Life' Block Like Mine...

A few people have asked about the pattern for the Tree of Life blocks I've been making. I would love to point to you straight to a book, but no... I had to fiddle around and draw up my own. Mostly because I wanted a different style of tree trunk than I was finding!
I drew up a larger style block as making hundreds of tiny half square triangles did not appeal. The picture below has the cutting instructions for making the bulk of the tree (units 1, 2 and 3), which include all of the leaves on the tree. If you want to use a mixed fabrics for the leaves as I did, then it's best to cut 12 squares instead of 11, mixing up your fabrics to reach that total. Or you can cut the 11 squares and then add in an extra triangle or two if you have orphan ones in your scrap bin.
I sewed all of the half square triangles with one of these methods. If you wish to achieve greater accuracy with your hst's then I suggest you cut your squares slightly larger and then trim down after sewing and ironing.

The picture below has the cutting and sewing instructions that I came up with for the tree trunk (unit 4). Mine actually finished up slightly larger than expected and so I just trimmed down after sewing. There was plenty of room at the edge to not worry about cutting off points.
After sewing a couple of these tree trunks, I determined that a certain sequence of sewing turned out a better looking unit. If you look at the picture above, I've tried to show you that particular sequence in a picture diagram there at the bottom of the graph paper. Following steps #1 through to #4 {and ironing after every step} produced the very best results for me. Sorry for  the cutting 'abc's' being out of order. The notes to myself were written like this and I chose not to rewrite later after I realized the weird order. Honestly, my handwriting tends to get worse the neater I endeavor to be. A second attempt would could have been fatal!
As you can see, I chose to make every tree with at least two different leaf fabrics and sometimes three. Most of the trees seemed to look better with an odd number of different looking leaves, but this, of course, will be up to you.
Even after making all of these Tree of Life blocks, I find that my hst's are still quite the work in progress. When sewing the four units together, I ended up having to use a pin at every single seam and other places as well. Did my blocks all end up at a proper 14" minus seam allowances? Well, no. But they are definitely in the ball park and that's really all I expect {or need}. Trimming down over-large hst's just for accuracies sake is not something I enjoy these days so a less than perfect block is not going to be an issue I stress about.

Oh, and for those that wonder about ironing? I ended up ironing my hst's as usual, but then I didn't iron again on units 1, 2 and 3 until I had the entire Tree of Life block together. It's very important that you iron the Tree Trunk pieces as you sew, but the rest is just pointless. Leaves going every which direction makes for bulky seams no matter what. Just sew your small rows together in a consistent manner, unit by unit, and it all irons out nicely at the end.

My advice is to make one test block before getting in too deep. Best of luck!

Email ThisBlogThis!Share to TwitterShare to FacebookShare to Pinterest
Labels: Tree of Life, tutorial 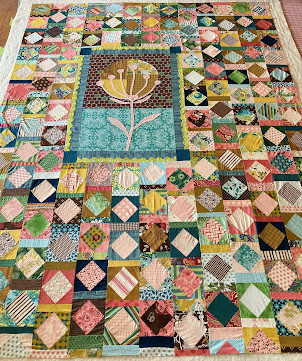