The Courage to Feel Creative: Habits of Creativity

One of the most fascinating thing to me about the average quilter is the widespread belief that there are those who are ‘creative’ and those that just aren't. There’s a feeling of ‘We weren't blessed with the creative gene and thus all our work is doomed to mediocrity except for the rare great quilt that comes about when all the proper stars align.’ Personally, for the first ten years or so of quilting, I had no idea there was even a creative ‘process’ involved (that applied to quilters) for everyone to learn to tap into and take advantage of. Learning to recognize that process is very important in growing our confidence to the point of ‘feeling’ creative. It's only when we properly recognize the process, that we can begin to develop and take advantage of it.

When we read about the creative process (no matter the medium applied to), it’s pretty much a universal understanding that there are four distinct steps: Preparation, Incubation, Illumination, and Implementation.


Preparation is basically what we think of as work. Like my daughter in band playing scales, warm-ups, drills and songs. Sometimes it’s enjoyable, but mostly it’s a part of the process that can be tedious and mundane. It's the learning and skills part too. Very important, but still, work.
Incubation is a part of the process that is ephemeral. Mostly because we can’t pin it down exactly--it just is. This is where an idea is percolating. You hear of quilts being allowed to marinate or simmer? Nothing physical is happening, but our subconscious is trying to make connections and burning through a million ideas all in the background. If this phase doesn’t get too messed up by all the busyness and immediate concerns of life, then….

Illumination can and will happen! We all know of it as the ‘light bulb moment’ and it never seems to happen at a convenient time. Usually, Illumination hits while doing something a bit brainless, like washing dishes, taking a shower, driving a well traveled road, or falling almost to sleep. This is the moment when ideas are literally spilling out all over themselves and we almost can’t keep up.
Implementation then would be the phase where the ideas we've been preparing and incubating can finally be put into action. Again, with my daughter in music, it’s where the song finally starts to flow. Implementation is yet another phase that involves work. It takes time and effort to put ideas into place. It also takes trust, which most of us have to cultivate. Not every idea will work out, but we won’t know until we are involved in the actual implementation of the idea.
It’s very important for us to take advantage of what we know about the process of creativity and how it applies to us as quilters. For instance, many of us put the brakes on our creativity simply by not making a record of our ideas when they occur to us. When the ideas starting flowing, we need to immediately put pen to paper so we will remember them for later! Other ways we short circuit our creativity is by the assaulting of our senses with too much computer/tv time, having jam packed schedules without proper time carved out to quilt, trying to quilt in a vacuum and not sharing, giving ourselves rigid unnecessary deadlines, or even maybe ignoring our own creative impulses in an effort to make something that we think will be well received by others. There are lots of ways we can sabotage our own creativity.
Before I understood that there was a creative process that might apply to me as a quilter, I would get frustrated by my habit of wandering through my quilting room and fondling fabric or laying projects out for inspection but basically doing nothing.  I thought it was wasted time and it really annoyed me. NO! That’s incubation without forcing or rushing a seed of an idea.

I used to get almost paralyzed by the fact that I somehow always ended up with 3 to 4 open ended quilt projects. Often, I would force one to completion before it’s time. Or I would refuse to start a new project until I whittled away at my ufo’s to my satisfaction. It’s tough to work on quilting as much as we’d like to when we only have one project going though. When the time comes that we’re stuck and need to make a decision before continuing, what are we to do?

I personally find that having a slow quilting project (or two) gives me lots of time to let my mind wander where it will while still getting another project ever closer to a finish. Or even chain piecing blocks. Or piling up lovely combinations of fabric for a future project. You get the idea. When I'm feeling restless, I do something with fabric or in the quilting room whether it's work or not--and even if it's only for 15 minutes! Then at least my mind will be focused (without forcing it) on the proper subject matter (without any particulars staring me in the face) and my dilemma is usually resolved all the faster. I have definitely been known to throw my chain piecing or hand quilting aside in my rush to write some ideas down or dig for certain fabrics and blocks!
Learning about the creative process is where I feel like I crossed through an invisible barrier with my quilting efforts. Being able to recognize my actions and feelings plus being able to take advantage of them and FOCUS helped me tremendously. I have a dedicated quilting space. There is pen and paper in my purse, by the side of my bed, in my kitchen and in my quilting room. I have a bulletin board with ideas in my quilting room. I have a design wall, albeit a small one, where I see some of my process all of the time. I have a blog where I share and open myself up to criticism (and hopefully support too). I include time in my schedule to quilt, sometimes even as a reward. I keep slow quilting projects available for when I visit, travel or wind down in the evening. I'm not afraid to have lots of open-ended projects or take a year to work through a single quilt top. Once in awhile I toss a quilt project aside to cut something out because I just can't wait to work on it. I work, do, make and create. It isn't always pretty. And as you can see, my creative process is sometimes even a rumpled mess.*wink

On another note, I've decided that although I'm returning to this conversation, it would be an injustice to try to do it on a pre-determined schedule. My priorities have to be, as always, my family and their particular concerns.

Email ThisBlogThis!Share to TwitterShare to FacebookShare to Pinterest
Labels: The Big Broken Dish, The Courage to Feel Creative Series, The Creative Process 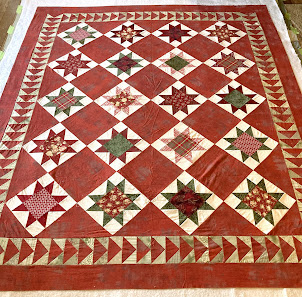